My mate Jumping Johnny Egan is one of the best marks of a footy that I have ever seen. As he launches himself towards the ball, his hands move from down by his waist into the air above his head before snapping open with wrist extension just before the ball smacks into his palms. Conversely, and keen readers of this intermittent blog will know exactly where I am going with this, I am one of the worst marks of the footy I have ever seen. At least, I used to be.

The local junior footy club (Go Sharks) began to run training nights for Dads. There was no game, just an excuse to run hard and do circle work. One night, in the middle of another ball dropping performance beyond belief, the bloke running the show pulled me aside and asked if anyone had ever taught me how to mark a footy. Before I’d even had a chance to realise that he wasn’t taking the piss, Jacko proceeded to outline exactly what I needed to do. I needed to be more like Johnny.

When Johnny marks the ball, his hands aren’t coming up from below the ball’s trajectory. Instead they are coming towards the ball but in such a way as to offset the trajectory and speed of the ball so as to give his hands as much time as possible to grasp it. Now that’s not what Jacko told me, but it is what he meant when he said “Low to high Hamma. Low to high mate”. It is however what an Italian neuro-physiologist found in a mind numbingly involved article with the disarmingly simple title, “Grasping and Catching” (1).

Catching is a combination of predicting the velocity and path of the object, adjusting proximal structures in such a way that grasp of the object is possible. Experience helps which probably is one reason the recent explosion in girls playing footy has seen a similar explosion in finger injuries within that cohort. What also helps is visuo-spatial ability, which is a little more difficult to train up if you haven’t been gifted with it to the same ability as Jumping Johnny. 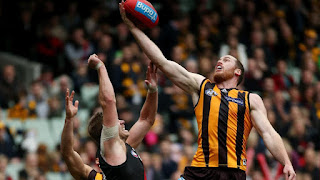 Whilst the article is at pains to point out differences in catching ability between professional and amateur sports people, it does indicate that a combination of training, technique and experience can make a difference. It is all about maximising the time you have getting your hand into position before it needs to grasp the ball to hang on to it which may be why an over hand catching technique proved more reliable. This technique may not be transferable to Australia’s greatest game in every instance, but the concept is, and getting your hands into position is the best way to start.